partially due to the weather,

state of the roads.

these are not just closed

due to snow, some

as cars slide, cause a commotion.

it is a steep hill, the crimea,

some call it a mountain 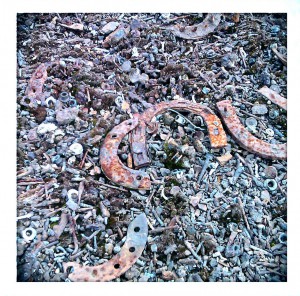 Esgidiau Meirw Boot Dump, Moel Bowydd Primary Reference Number (PRN) : 14626 Trust : Gwynedd Community : Ffestiniog NGR : SH69924845 Site Type (preferred type first) : Modern REFUSE DISPOSAL SITE Legal Protection : Description : A mound of slate waste covered to an unknown depth with the (?burnt) remains of thousands of hobnail boots, heel plates, nails, eyelets etc. Dimensions 40 x 30 x 2.5m. <1> A low mound about 35m in diameter lies to the east of the A470 (Plate 66). Its earliest phase consists of slate waste from a shallow linear working shown on the 1889 OS 25 map. This is almost entirely covered by a dump of waste boots. The upper layer consists entirely of heel plates, eyelets, nails, screws, sole shanks and occasional sole plates (Plate 67). Beneath this is a thick layer of ash, also containing metal fittings. Until quite recently there was a grave slab with a pair of boots incised on it along with the inscription Esgidiau Meirw (dead shoes). The stone now lies on the wall of PRN 14777 (Plate 68). It was probably moved by the land-owner for safe keeping after being daubed with paint. The dump is known locally as Tomen Sgidiau (boot dump) and dates from World Wall II. The boots are rejects from a factory that was set up in Blaenau Market Hall to recycle old boots and shoes for the army. (Hopewell, 2005) A low heap of slate waste lying to the east of the present main road. The tip is covered with the rusted metal fittings of a large number of hob nailed boots, and other small metal waste, including nuts and bolts. There is also a significant quantity of a fine silty material – possibly the residue of burnt and decayed leather. On top of the mound is a slate grave slab with a pair of boots incised upon it and the inscription “Esgidiau Meirw” (dead shoes). The feature is thought to be a World War II army boot dump. (Riley & Roberts, 1995) Sources : Riley, H. & Roberts, R. , 1995 , A470(T) Blaenau Ffestiniog to Cancoed Improvement ( © GAT) Hopewell, D. , 2005 , A470 Blaenau Ffestiniog to Cancoed Improvement Pt I & II ( © GAT) Hopewell, D. , 2000 , Upland Survey 2000 , <1> Events : 40503 : Gwynedd Upland Survey 1999-2000 Moel Bowydd (year : 2000) 43801 : A470 Blaenau Ffestiniog to Cancoed Improvement: Archaeological Recording PtI&II (year : 2005) 40295 : A470(T) Blaenau Ffestiniog to Cancoed Improvement (year : 1995)